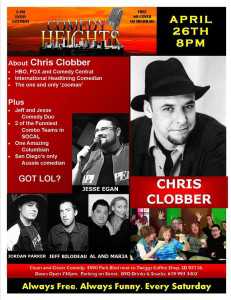 You’ve seen him before at Comedy Heights, but now you get Chris Clobber as your headliner, which means twice as much hilarity and unexpected laughter.  Seriously, you never know what you’re going to get when Chris Clobber takes the stage.  Well, actually that’s not true.  You’re guaranteed tons of laughs; you just don’t know what he’s going to do to give you those laughs.

Arrive early to get a good seat–seating, like parking, can be tricky.  Feel free to bring snacks, drinks (packed in brown paper sacks!) and all of your friends.  Doors open at 7:30 and the show starts at 8pm.