We’ve Got Your Friday and Saturday Covered! 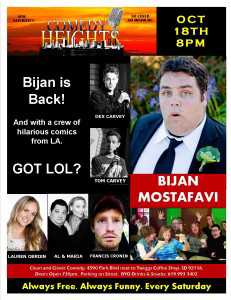 Get your LOL on with Comedy Heights this Friday and Saturday!

This Friday, head to Reds in Point Loma for Funny Fridays!  This week, You Tube sensation Matin Atrushi will be headlining, and he’s joined by an all-star cast including Chet Sewell, Scott Blunen, Jennifer Congernaum, Jordan Parker, Al Gavi, and your awesome Aussie host, Maria Herman.

We have a huge show on Saturday at Twiggs featuring Bijan Mostafavi and the Carvey Boys, along with Frances Cronin, Lauren O’Brien, Maria Herman, and host Al Gavi.  Tom and Dex Carvey  are coming down from LA this weekend with their family and friends to bring you some hearty LOL with a side of Irish ROTFL (that would be cousin Frances).

So make sure that you have Comedy Heights on your calendar this weekend!