Tony Calabrese is at Twiggs 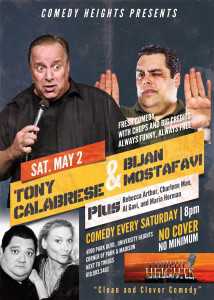 Known as America’s Funniest Banker, this Italian-American lover of Patron has been a fixture of the San Diego comedy scene for more than twenty years. He’s a 2014 finalist in the Las Vegas World Series of Comedy – beating out 4000 other comedians for a spot in the final 8. He’s the winner of the 2013 Flappers Ultimate Countdown Competition, a regular in Las Vegas, and throughout SOCAL. Comedy Heights endorses Tony as a tutor to up and coming comedians who want to learn the ropes.

See Tony this Saturday at 8pm at Twiggs!  (Be sure to bring your own Patron!)