Ryan Hicks has appeared at Comedy Heights a few times, but this coming Saturday Night will be his first time headlining the big show. And he’ll be joined by his best friend Last Comic Standing semi finalist and Fox Laugh’s Host Taylor Tomlinson. Add in a Comedy Heights favorite Cat Wagner and few other friends and you’ve got another 5 star yelp rated show in the making! 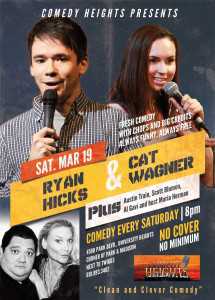