Comedy Heights is so lucky to have access to so many fabulous performers and Laura Hayden is just one of the many comedians who loves Comedy Heights back 🙂 Laura has performed all over the world entertaining the troops and has some very funny stories from the Middle East you are not going to want to miss. Plus this week you have Late Night TV funny man Andrew Norelli who’s performed on Late Late Night with Craig Ferguson, The Letterman Show and numerous times on Jimmy Kimmel Live. He’s just that good.

Every week audiences just keep pouring into our little Indie Venue to soak up the laughs and enjoy a broad range of comedy from comedians who LOVE to entertain. Our comics could perform at other venues when they’re aren’t touring, but they always LOVE Comedy Heights because it’s consistently good and everyone knows it. So join us this week and every week, and do tell your friends. Al Gavi and Maria Herman will be there to welcome you to their humble little green room next to Twiggs Coffee Shop. As always give yourself enough time to find a parking spot. The Comedy Heights show always starts on time at 8pm 🙂 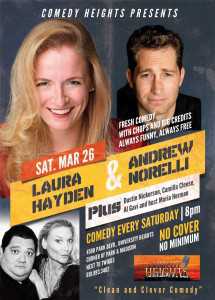