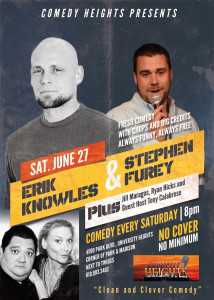 Erik Knowles is a father and a retired Marine, and his stories from the battlefields of step-fatherhood are just as funny as his stories about being the funny guy in boot camp.

Knowles is immediately relatable and incredibly likable. He’s performed with everyone from Sarah Silverman to Jon Lovitz, and he has been a finalist in the 2010 World Series of Comedy in Las Vegas as well as the California Comedy Festival.

See him this Saturday at Twiggs!