We love March at Comedy Heights. There’s a lot of touring comedians from LA who are staying in town to audition for sitcoms for the pilot season, and at the weekends they hop on down to San Diego to grace our stage with their special magic. Comedians like Danny Villalpando, Laura Hayden and John Cleese’s daughter Camilla. Plus local favorite Ryan Hicks will be headlining for the first time … and every week the best of the best combinations of comedians so each show is completely different with a different flavor. Anything can happen! 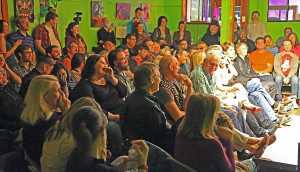