Looking Ahead At Comedy Heights 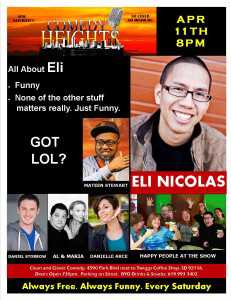 As March comes to an end, it’s time for some laughs.  And we’re here to serve up laughs with a side of raucous giggles.

Mark your calendars for these exciting shows at Twiggs.  All shows begin at 8pm.

April 4: It’s the Easter Show at Comedy Heights, and Steven Briggs will be the headliner and honorary Easter Bunny.  He’ll be joined by Dewey Bratcher, Steve Heyl, Al Gavi and Maria Herman