Anita Is Back at Twiggs!

The Queen of Comedy Anita Milner headlines at Twiggs Saturday. She is simply our favorite Lady of the Night … AARP Member extraordinaire and HILARIOUS every time! She’s a regular at Aces Comedy Club and performs all over SOCAL. No matter your age … Anita is a crowd pleaser every time. 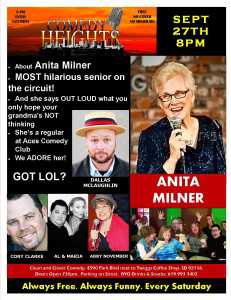 The show starts at 8pm.  Doors Open 730. You’ll need to allow for time to park and time to make a drink/snack run.  It’s always BYOB at Twiggs. See you there 🙂