Coming Up This Week from Comedy Heights 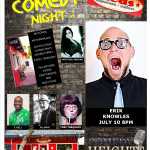 You know you’re funny if you can make a Marine laugh.  Erik Knowles is so funny he made his commanding officers crack up…which led to hundreds of push-ups.  Fortunately for us, Erik Knowles didn’t let those push-ups stop him.  He’s America’s funniest Marine, now a dad and hero to his kids.  He’s been a finalist in the California Comedy Festival and the World Series of Comedy in Las Vegas.  He’ll be performing at Reds this Thursday with an all-star lineup of fresh comedians who are guaranteed to keep you ROTFL.
Later this week, Tony Calabrese will be headlining at Twiggs.  As America’s funniest banker, Tony tells it like it is.  And if you don’t like it-fuggedaboudit!
Reds: Thursday at 8pm, Point Loma
Twiggs: Saturday at 8pm, University Heights