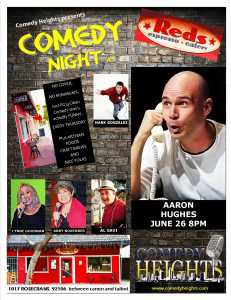 He may be Canadian, but like his fellow comedic compatriots from the North, he’s pretty darn funny.  Aaron Hughes is headlining at Reds this Thursday, and he’s bringing the C-Game with him.  That’s his Canadian Game.  Hughes will be joined by Mark Gonzalez, Tony Calabrese, Abby November, and your host Lynne Goodman.

If you haven’t been to Reds yet, you’re missing out on great food and a huge selection of wines and craft beer.  Comedy and Craft Beer.  What’s better than that?

Also be sure to catch this Saturday’s show at Twiggs in University Heights as nationally acclaimed touring comedian Paul Ogata headlines the show.  This is an opportunity not to be missed.