Back to Back Nights of Hilarity This Week 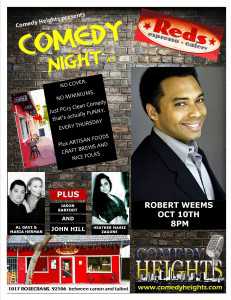 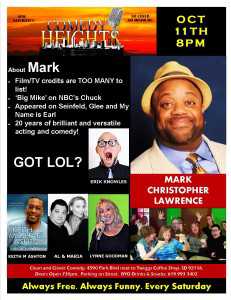 Now that Reds is on Fridays, you can have a double shot of comedy served straight up with a side of Al Gavi and Maria Herman every Friday and Saturday night!

Come down to Reds at 8pm on Friday to see headliner Robert Weems in action.  This smooth gentleman will keep you calling out for more…and more…and more.  He’ll be joined by Heather Marie Zagone, Jason Barfoot, John Hill, and co-producers Maria Herman and Al Gavi.

He’s back!  The man himself, Mark Christopher Lawrence, is back to bring you a load of laughs.  MCL will be joined by Erik Knowles (Semper Fi!), Lynne Goodman, Keith M. Ashton, and  Al Gavi and Maria Herman.