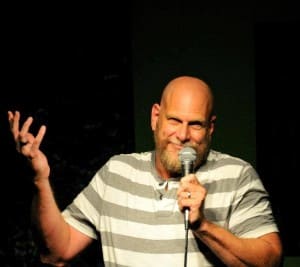 Steve is America’s funniest middle-aged left-handed bearded gay powerlifter – hey it’s a niche.  Based in San Diego, Steve has performed from Michigan to Texas and Burning Man to Colorado since starting comedy in 2012.  He is originally from “the other Orange County” on the “Brooklyn Bubba Line” – a.k.a. Orlando Florida and his Southern upbringing sometimes comes through on stage. He draws primarily from his own life for his humor.  In addition to standup, he has been seen in music videos, short films and the upcoming (2014) season of the web series “Where the Bears Are”.