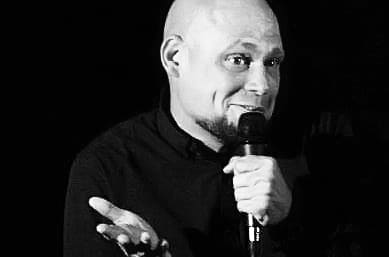 Erik Knowles did his first stand-up set in the fourth grade at a summer camp talent show. Even at just nine years old, his two minutes of Nickelodeon jokes killed. His next performance was in 1999 while he was in the Marine Corps. One of his superiors, noticing Erik’s ability to make his peers laugh, ordered him to do a stand-up routine at the upcoming squadron Christmas Party talent contest. Erik won the contest by making fun of the Commanding Officer. After he got out of the Marine Corps in 2003, he did his first open mic at the Comedy Store in La Jolla. After that, there was no stopping him. Over the next few years he went on to perform with such headliners as Sarah Silverman, Pauly Shore, Bobby Lee, Zach Galifianakis, John Lovitz, Bobby Slayton, Gene Pompa, Joey “Coco” Diaz, Carlos Alazraqui, and many, many more. He was a finalist at the California Comedy Festival, The World Series of Comedy in Las Vegas (2010), and has performed in comedy clubs and casinos, and military bases all over California, Arizona, Nevada, and Texas. Erik’s show leaves everyone satisfied. He looks back nostalgically, at his younger days in the Marines, boot camp, partying, and even a few war stories from his time in overseas in Operation Enduring Freedom and Operation Iraqi Freedom. He then contrasts that with a witty look at his adult life full of responsibilities, becoming a father, and his uncontrollable desire to challenge social stigmas. His comedy is refreshing and edgy without being filthy. Erik Knowles fits nicely into any lineup and is a perfect fit for any comedy club in the country.