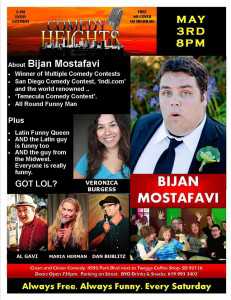 Get ready for a big night of comedy this Saturday at Comedy Heights!  Every Saturday we promise fresh, free and really funny comedy at 8pm.

Remember, doors open at 7:30pm and it’s a good idea to arrive early to reserve a seat.  You don’t want to be that guy who comes in late and has to squeeze into the front row.  Or maybe you do.  Some people like being called out….