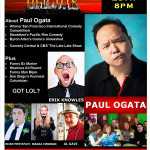 Hawaii’s finest comic Paul Ogata will be headlining at Twiggs tonight.  This is an incredible opportunity to see this phenomenal comic in person with NO COVER.  That’s right, PAUL OGATA with NO COVER.  That’s a pretty big deal.  Paul Ogata was the winner of the 32nd annual San Francisco International Comedy Competition and he has appeared on The Late Late Show, Comics Unleashed, and Live at Gotham.  Ogata is an international touring comedian whose next stop is Australia later this summer.

Ogata will be joined tonight by Erik Knowles, Bijan Mostafavi, Al Gavi, and Maria Herman (who returned today from her own Australian tour).

Get there early–this is the biggest show of the year. You won’t want to miss it!